In the summer of 2020, the 75th anniversary of the atomic bombing, a picture book titled “Reborn as  Pan flutes” was published. This picture book is based on a true story about a tree that survived in Hiroshima, where it was said that no plants or trees would grow for 75 years after the atomic bombing. The tree was made into pan flutes, and became a symbol of peace. We spoke with Mr. SHIMAMOTO Hiromitsu, who directs the choir at Senda Elementary School (Senda-machi, Naka Ward, Hiroshima city), where the book was modeled on, and Ms. SUYAMA Hiromi, the author of the picture book.

The children singing and performing are trying to delivery a message of peace from Hiroshima so that people can think about peace and atomic bombing.


“Six years ago, Chinese junipers exposed to the a-bomb planted in Senda Elementary School died, and we wanted to preserve the tree as something tangible.  So, with the advice and help from many people, we decided to create instruments with it. It became ‘pan flutes’ that children can easily learn how to play.” (Shimamoto)


The Senda Pan flute Choir is a group of third year elementary students to third year junior high school students. They perform “Amazing Grace” and “The Song of Aogiri(Phoenix Trees )” together with Pan flutes and choir.

The pan flute is a musical instrument made of reed, bamboo or wood tubes. Over the course of three years, 95 pan flutes were made by Mr. KOHARA Yoshihiko, a pan flute artist   living in Hiroshima City. The number of students in the choir has increased over the years and currently consists of 28 students.


Ms. SUYAMA Hiromi is a children’s literature author living in Hiroshima City. Her major works include the “Baker’s Easton” series (Shuppan Works) and “Baumkuchen and Hiroshima: A Story of German prisoner of war, Juchheim” (Kumon Publishing).


Ms. SUYAMA Hiromi, author of the picture book, read a newspaper article about Chinese junipers exposed to the a-bomb that had been reborn as “Pan flute.”

This led her to interview people about the Senda Elementary School choir, the school’s history, the Pan flute Workshop and A-bomb survivors.

“The beauty of the choir’s voice, the sound of pan flute, and the children’s hope for peace strongly appealed to me. The children are trying to pass on a message of the importance of peace to the future. I thought, ‘I want to tell people about this wonderful activity.’ Also, as I interviewed the atomic bomb survivors, I learned that some had never told anyone about the atomic bombing, but now they are beginning to talk about it,  ‘We have to tell people about it now.’ There is a similarity between the Pan flute Choir and the survivors, which both began to spread message of peace.” (Suyama)

Mr. SHIMAMOTO Hiromitsu has been teaching at elementary schools for many years.

He continues to convey the importance of peace to children through music.

As the picture book “Reborn as Pan Flutes” was born, the Senda Elementary School Choir has now changed its name to the Senda Pan flute Choir and continues to practice regularly.

“Music is an art of time, so it disappears. Music can be preserved on recorders and CDs, but it’s a dream come true if it will remain in a different form, in the form of a picture book, and I’m very happy about that,” says Shimamoto.

On August 6, 2020, the children’s voices of the choir and the performance of Pan flute were live streamed (pre-recorded) to the world. They will continue to convey the message of peace from Hiroshima to the world together with “Reborn as  Pan flutes.”

On August 5, 2020, the Senda Pan flute Choir perfomed and recorded in the Hiroshima Branch of the Former Imperial Bank of Japan , as part of the “Hiroshima to the World Art Event for Peace, Art and Music”.

Only Japanese is available.

Atomic bombed trees that survived the bombing can still be seen today. We are introducing the existing trees. 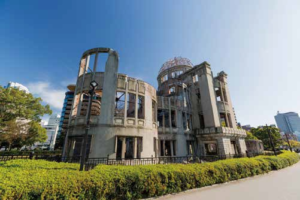 The piano, which miraculously survived the atomic bombing of Hiroshima, is also an instrument that lets people feel the sound of peace. This website introduces activities related to Hibaku-pianos. 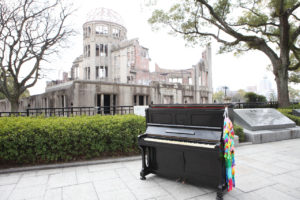