Hiroshima「」- 3rd Generation Exhibition: Succeeding to History, where three generations think about and pass along the legacy of Hiroshima

Those active in Hiroshima「」- 3rd Generation Exhibition: Succeeding to History under the motto “finding ways for the generation that did not know war to pass on the legacy of Hiroshima to the next generation” are mostly Tokyo residents in their 20s and 30s.

The opportunity to form this group presented itself when its representative director, Hiroshima native Ryōko Kubota, was employed as a dialect coach in 2014 for the closet drama “Chichi to Kuraseba” (The Face of Jizo), which staged Hiroshima in the aftermath of the atomic bombing.

We talked with Ms. Kubota about Hiroshima「」- 3rd Generation Exhibition: Succeeding to History in which many of the younger generation participate.

“Until I was hired as a dialect coach, I wasn’t particularly interested in the atomic bombing, but since I was raised studying peace education, I thought I knew enough about it. And yet, when I read the novel that provided the script for the closet drama, I realized there was still so much I didn’t know. Although she didn’t hail from the area, the actress who performed in it studied about Hiroshima earnestly, and I also felt ashamed of myself for not having done more. So, wanting to make a difference, I reached out to my friends. That was in 2015, the 70th anniversary of and a major milestone year for the atomic bombing.”

A variety of programs that three generations–grandparents, parents, and children–can freely participate in are being prepared for the exhibition.

“The first thing we tackled was ‘redoing peace education.’ I went to Hiroshima with like-minded members, and we toured the Peace Memorial Park and the Hiroshima Peace Memorial Museum together, as well as the Fukuromachi Elementary School Peace Museum, the Honkawa Elementary School Peace Museum, and the Former Hiroshima Branch of the Bank of Japan in the area. After that, we resolved to create a place where we could share what we saw and heard, and decided on holding an exhibition. Besides exhibiting the events of August 6 and the testimonies of survivors and such, we also created a space where parents and children could participate in peace education together. What we’re mindful of in the exhibition we hold is creating a place that’s easy to enter and easy to relate to. We believe it’s a matter of creating an atmosphere where one could, say, casually drop by without thinking it’s a difficult subject or has nothing to do with me.”

“Online Tōrō Nagashi (Lantern Floating),” an ongoing project since 2015. On August 6, 2020 as well, virtual lanterns containing peoples’ sentiments on Hiroshima, the anti-nuclear movement, and peace were floated down the internet.

“In 2020, in order to prevent the spread of the novel corona virus, we enhanced our online communications without holding the exhibition. ‘Online Tōrō Nagashi (Lantern Floating),’ which we’ve held annually, involves figuratively floating messages of peace online; this year, we were able to project it at the Former Hiroshima Municipal Baseball Stadium. An elderly man who participated every year also came to the venue because the lantern floating in the Motoyasu River was canceled. I was so pleased to have been able to float sentiments that previously had nowhere to go. Since it was an online event, there were many young first-time participants, and people not only from Japan but many from abroad joined in as well.”

At the exhibition, people can listen to survivors of the atomic bombing (“pass down a story”), and interviews are also conducted with those involved in the peace movement (“succeed to history”).

“I think our efforts are like planting seeds. I’ve been active for about five years, and I feel like seedlings are beginning to sprout little by little. Of course, it’s fine if those seedlings don’t sprout right away, and I’ll be happy if those who came to the exhibition as children perhaps think back on it one day when they become adults and visit Hiroshima.

There’s a blank space enclosed in Japanese-style quotation marks in the name of the exhibition, and that’s because it carries the wish that visitors don’t simply receive the information but think with their own opinions in mind. I’d like for those who receive it, in their own ways, to pass on Hiroshima to the future.”

Representative director of Hiroshima「」- 3rd Generation Exhibition: Succeeding to History. She is a third-generation survivor of the atomic bombing by way of her grandmother. Including web design, her main occupation is a creator.

We have passed along Hiroshima and have previously held the exhibition we conceived in various areas such as Tokyo, Kanagawa, Sendai, and Hiroshima. We have also made various resources available online such as interviews with atomic bombing survivors, independent research tools to reflect upon Hiroshima, and exhibition schedules via our website.

Online learning program is useful since people can learn wherever and whatever time you like. We introduce 3 websites which you can learn about nuclear weapons and building peace. 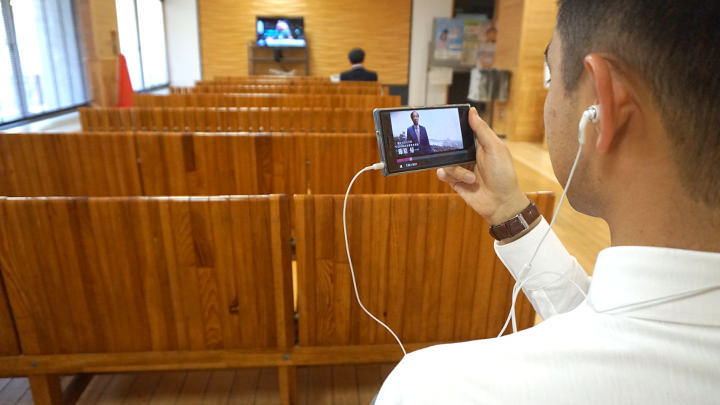