The Orizuru Tower standing right next to the Peace Memorial Park includes a variety of facilities such as Hiroshima Hills, a roof observation deck where you can overlook the Atomic Bomb Dome, The Orizuru Square, where a variety of digital attractions can be enjoyed, and SOUVENIR SELECT Hito-to-Ki, where famous products from Hiroshima are sold. Also, it includes “Akushu Café” where you can stop by during sightseeing and strolling. Since its opening in 2016, it has welcomed many guests from Japan and abroad, and is now popular and essential for sightseeing in Hiroshima.

From the roof observation deck of the Orizuru Tower, you can see the Peace Memorial Park, the Atomic Bomb Dome, and the city of Hiroshima at once.

The tower was built by MATSUDA Tetsuya , the current chairman and CEO of Hiroshima Mazda Co.,Ltd. Surprisingly, the Orizuru Tower was built by a single private company at its own expense. Why would Hiroshima Mazda, a company that sells and repairs cars, build a facility to spread the word that Hiroshima is a city of peace? –It was an encounter between Mr. Matsuda and the tower.

When the previous building of the Orizuru Tower was on the market, Mr. Matsuda happened to visit it. The view he saw on the roof of the building instantly captivated him. With Peace Memorial Park directly below and the city of Hiroshima stretching out in the distance, Mr. Matsuda was struck by the view of his hometown, Hiroshima, because he had never seen like it before.

” It seemed to him to be proof that the city which was said that “no grass or trees will grow for 75 years” had recovered from the devastation of the atomic bombing.

Everyone in the world should see this view. It is my mission to show them this view!

It was Mr. Matsuda’s desire to show the present state of Hiroshima that would serve as the most important message of peace.

The roof observation deck is the most symbolic expression of the tower’s approach to peace. Hiroshima Hills is made of lumber such as Japanese cypress and cedar, and a pleasant breeze blows through it. It creates a serene and solemn atmosphere reminiscent of the grounds of Itsukushima Shrine, one of world heritage sites in Hiroshima.

Miyajima is one of the three most scenic places in Japan. Itsukushima Shrine, standing on the island, was built by TAIRA Kiyomori in 1168 to house a large shrine. In 1996, it was registered as a UNESCO World Cultural Heritage Site.

There is a wooden observation deck on the roof of the Orizuru Tower. A breeze blows through and you can feel the sounds and smells of Hiroshima as it is. On a clear day, you can see Mount Misen, Miyajima’s highest peak.

This reflects Mr. Matsuda’s wish to have this place become a “place for meditation”. He told that I want you to think about the meaning of this view, about your hometown, and think about the value of peace — not the cold concrete, but the natural environment that can soothe the soul and bring us back to our honest feelings was a necessity.

Matsuda does not stop there.

When the tower opened in 2016, some people complained that the admission fee to Orizuru Tower was too expensive. “1,700 yen for a height of only 50 meters” “They want to make money from peace! –.

But there’s a reason for the price. If the admission fee is low and a lot of tourists visit, the atmosphere of Hiroshima Hills like that of a Zen temple would be easily destroyed. No matter how many people come to the event, if the message you want to convey is not conveyed, that will be mistaking the priorities.

Mr. Matsuda’s determination to ensure that the value of Orizuru Tower as a place of prayer and meditation will never be diminished – his firm conviction is confirmed every time he encounters the deep and brilliant satisfaction of visitors.

Open: 10:00-19:00 (Last admission to the observation deck is one hour before closing. Opening hours may change depending on the season and events)

* Only Japanese is available

Introducation of initiatives by Hiroshima Prefecture

Part of the lecture was shot at the Orizuru Tower. You can catch a glimpse of Hiroshima from the tower. 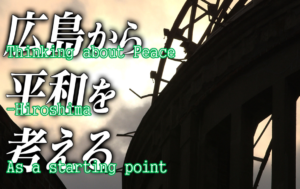