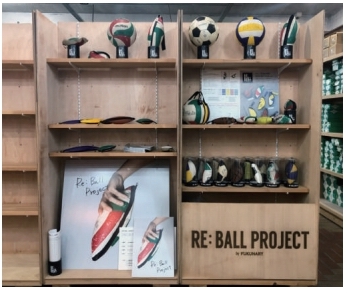 A section of the RE:BALL PROJECT in the display space on the second floor of the company

Yahashi Souin, Inc. has been engaged in apparel contract manufacturing over many years. Its clients include apparel brands, such as COMME des GARÇONS. In addition to clothes production, the company also manufactures products under the concept of “products using materials locally produced in Hiroshima and sewn locally in Hiroshima.” Examples based on this concept include Onomichi canvas made in Onomichi and gold-brocaded satin damask made in Fukuyama. The “RE:BALL PROJECT,” a joint project with Mikasa Corporation to produce products using used balls as materials, is also based on this concept. In the RE:BALL PROJECT, Yahashi Souin, in cooperation with Mikasa, collects and recycles used balls, which are usually disposed of, to generate new value. The use of new materials has created new added value in the sewing industry in Japan. The effort to reuse balls that have always been used by somebody and those that have long been used and adapted to the user’s hands, instead of disposing of them, helps create a new lifecycle for a product, from production to disposal.

I had thought that there was no other way to dispose of used balls. Yahashi Souin changes them into new forms using their skills to manufacture corporate uniforms and sew clothes, helping achieve sustainable production and consumption. Since ball players feel strongly attached to balls that they have used, particularly those that have adapted to their hands, a product made from such a ball is truly one-of-a-kind in the world. Because products made by Yahashi Souin are all practical and refined, they are expected to sell well.