「In the corner of this world 」Location tour

The above image is the movie “ In This Corner (and Other Corners) of the World.”

“In this Corner of the World” is a feature-length animated film (premiered in November 2016) portraying how URANO Suzu, a young woman born and raised in Hiroshima City in the early Showa era (1926-1989), married into SOGA Shusaku, a civilian official who worked for the navy and lived in Kure City, a then major naval port town for the Imperial Japanese Navy in Hiroshima Prefecture, and how she began to gradually fit in well with her new family and the life in Kure City. This movie carefully depicts the lifestyle at that time, focusing on Suzu, who tries to live in a new family by devising to liven up the table and remake clothes, as the war goes on and rationed goods decrease. A thorough historical accuracy has added further reality to the original world, and the life in the wartime (from around 1944 ) is described vividly. It calmly delivers a message that the inhumanity of war lies in the fact that the deteriorated war situation deprived people of their modest happiness that they had enjoyed before the war through soft-touch animations, which make a clear distinction from conventional war films. It is hoped that this film will remind us of how invaluable our mundane everyday life is, how cruel the war can be which robs us of it unreasonably, and how precious peace is.

The present Aioi-bashi Bridge. The “T”-shape remains the same even now.

The place where Suzu and Shusaku met for the first time

The bridge is located at the fork of the Motoyasugawa River and the Honkawa River (the former Otagawa River). In 1932, the once railway bridge was reconstructed, and in 1934, another bridge beam was extended from the center of the bridge to the northern tip of the current Peace Memorial Park, rendering it a nationally rare “T”-shaped bridge. It is said that the bridge was used as a target of the dropping of the atomic bomb.

The shock wave was so strong that the bridge beams deformed, the north railing fell in the river, and a part of the pavement heaved. After the war, the bridge was reconstructed and had been used until 1983, when it was newly constructed due to aging and became the present shape. To harmonize with the surrounding environment, such as the Peace Memorial Park and the Atomic Bomb Dome, granite stones were used for railings and newel posts. The bombed newel posts are preserved to pass the trace of the atomic bombing down to the present at the foot of the bridge. A part of the bridge beams that deformed due to the bomb blast is on permanent display at the Peace Memorial Museum.

The Industrial Promotion Hall standing beside the Aioi-bashi Bridge. It must have been a symbolic building of Hiroshima with its state-of-the-art design and engineering in those days.

The present Atomic Bomb Dome (former Industrial Promotion Hall). The distinctive dome-shaped roof reminds us of its original appearance at that time.

A building of which Suzu drew a sketch beside the river

Stone materials and mortar were used for the exterior surfacing. A five-story staircase was built in the center of the front side of the three-story building. The European-style building with the oval-shaped dome made of the copper plate placed on the top stood out in the downtown area of Hiroshima City, where most buildings were two-story wooden buildings. The atomic bomb exploded about 160 meters southeast from here and about 600 meters in the sky. The building survived the bombing miraculously because the blast blew almost in a vertical direction. In 1996, it was registered as a World Cultural Heritage site.

When the atomic bomb dropped, the building was located about 170 meters away from the hypocenter. It burned down except the basement, but was restored after the war.

Restoration work is underway. It is planned that a tourist information center, shop, and display space will be set up inside the building.

Lost Suzu took a short rest before the show window

The Taisho-ya Kimono Shop, whose head store was in Osaka, was relocated from Saikumachi on the other side of the river to a new building in 1929. With three stories above ground and one underground, the modern-looking, steel-reinforced concrete building attracted many customers as that kind of building was rare in those days. The first floor was a sales area with a show window, and the second and third floors were also retail premises. It was quite unusual in those days in Japan that customers were allowed to enter the building with their shoes on. In 1943, the kimono shop was closed by the order of the Textile Control Ordinance. After that, the building was owned by the Hiroshima Prefecture Fuel Rationing Union, and called “Fuel Hall.” The atomic bomb exploded over the building, which was located only 170 meters away from the hypocenter. The roof was crushed, and the whole building except for the basement burned down, but the basic building structure survived the blast. In 1982, the building was rebuilt into the Rest House of Peace Memorial Park and has been served as a resting place in the park. It is now under renovation work. (It is scheduled to reopen in July 2020.)

Mitsugura in the 1955’s. It survives the war and leaves its appearance (Courtesy of Kure City)

The storehouses are registered and preserved as national important cultural properties. Pay heed to the surrounding environment as they are located in the residential area when visiting the site.

The earthen-walled storehouses were built in 1809 by the Sawahara family, a merchant family doing business as Sawada-ya that assumed an important role as a village headman for generations. The residential area is divided by the main road into east and west plots of land. On the east side, there are the main building and the front gage, on the west side, mitsugura (three earthen storehouses) and shinkura (new storehouse). Mitsugura is considered to have mainly stored rice, and features three storehouses that stand side by side in a north-south direction, namely, two-story uwagura (upper storehouse), nakagura (middle storehouse), and shitagura (lower storehouse). Because they were located on the outskirts of Kure city, they survived air raids miraculously. The three storehouses are rare buildings in Kure city that still retains the appearances they had in back those days, and are registered as national important cultural properties together with the main building and maezashiki as “the former residence of the Sawahara family.” They are seen as one of the largest merchant houses that represent the Chugoku region.

Kure Chinjufu was one of the headquarters of the navy established in four naval ports in Japan (Yokosuka, Kure, Sasebo, and Maizuru) to accelerate the modernization of Japan. The current building was built as the second government building with a two-story and one-story basement structure in 1907 after the first building was damaged by Geiyo Earthquake. A stately atmosphere exuded from the harmony between red bricks and granite stones catches your eyes. The beautiful brick building, which stands on a hill on the seaside, has an exterior brick wall built in an English-style brick pattern. It also features an elaborate design, as can be seen in the second floor stone pillars on which cherry blossoms are engraved. The building design with two front entrances facing the inland and the sea can be said to be a distinctive characteristic of the navy. The dome-shaped roof in the center, which burned down in air raids, was restored in 1999 and became a symbol of Kure City. At present, the building is still being used as the facility of the Marine Self-Defense Force. It is opened to the public on Sundays. (An application is required in advance from the HP of the Kure District.)

It features round side windows with a very modern design at the time. ( Courtesy of Hiroshima Prefectural Archives )

It is located just to the current “Megane Bashi Intersection.” The side windows have not changed since then.

The Megane-bashi Bridge was a crossover point between the military hub for the Imperial Japanese Navy, including Kure Chinjufu, and the living area of ordinary citizens. At present, the bridge can’t be seen because it was buried underground, but its remnant remains as the name of an intersection below the elevated bridge of the JR Kure Line. The Kure Navy Petty Officers Assembly Hall, which was commonly called “Aoyama Club,” was constructed in 1903 near the bridge as a concrete building with its eye-catching round-shaped entrance. It was built for the crews of the former naval vessels to stay there and was used by petty offices and sailors as their meeting place and accommodation facility. After the war, the Maritime Self-Defense Force used the building, but it is now closed due to aging.

This lecture is for those who want to learn more about the realities of using a nuclear weapon and the current situation on the nuclear weapons. By inviting Kiichi Fujiwara, professor of the Graduate School of the University of Tokyo, as a lecturer, this online lecture provides five courses to learn about peace.

Online Learning Program, “Think about Peace – Hiroshima as a starting point” is available! 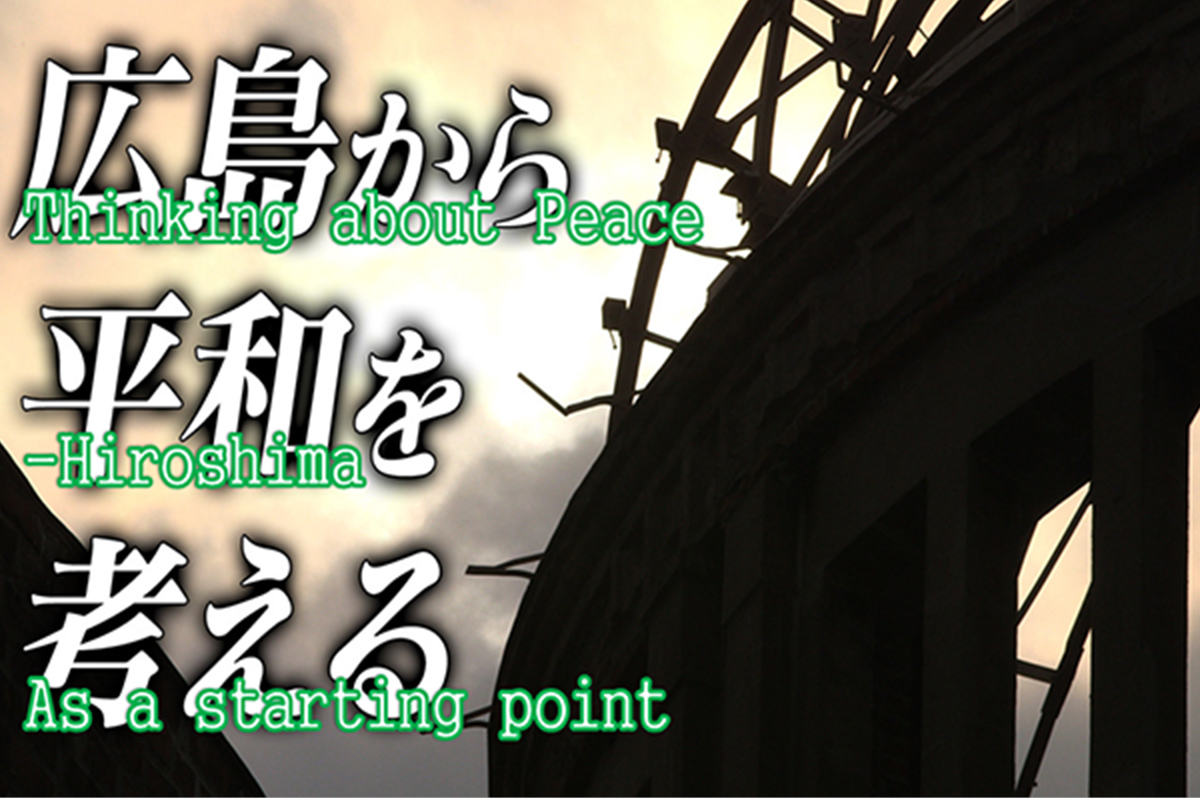 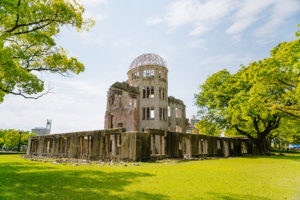