chapter1-1Part1: Setting the Agenda 1.Why Hiroshima?

Why do we make this proposal from Hiroshima? The first reason should be obvious, for Hiroshima was among the two cities that were bombed by nuclear weapons, and the cry “No more Hiroshimas” has been shared by its inhabitants over the subsequent decades. The second reason, however, is important as well; as a city that was restored from the ashes and born again as the city of peace, Hiroshima has paid close attention to the miseries of war overseas. It is only natural and appropriate, therefore, that Hiroshima should be the place for proposing both a non-nuclear future and peace-building in regions torn by violent conflicts.

Before and during World War II, Hiroshima was among the many centers of the Japanese military establishment, with army regiments, gunpowder factories, and military academies in the vicinity. After the atomic bombing, Hiroshima achieved a new identity as a center for the abolition of nuclear weapons and the promotion of peace.

The bomb totally destroyed Hiroshima, killing 140,000, injuring and/or exposing to radiation two hundred thousand more. It destroyed not only human lives and infrastructure but also families, local communities, and memories, leaving few if any photographs to remember the deceased. Survivors took it as their responsibility to tell what happened and work for the future.

The bombing nursed a commitment to peace among the people of Hiroshima, who began to call for action to prevent another nuclear disaster. Through these efforts, the government and the people of Hiroshima appealed to the world, asserting that humans cannot coexist with nuclear weapons and that nuclear weapons must be abolished. The appeals from Hiroshima and Nagasaki motivated worldwide anti-nuclear movements calling for the abolition of nuclear arms, making Hiroshima, along with Nagasaki, a symbol of anti-nuclear and peace movements. Considering such sustained efforts in the past, we believe Hiroshima is the right place to start a new initiative for reducing and abolishing nuclear weapons from the Earth.

b.Utilizing the lessons of reconstruction

As a symbol, Hiroshima stands not only for a non-nuclear world but also for peacebuilding in regions torn apart by interstate wars, civil wars, and extreme violence in general. Hiroshima is a place sobered by the loss of life, destruction of infrastructure, severe illness caused by radiation from the atomic bomb, and discrimination and prejudice against the A-bomb survivors. The people of Hiroshima have now constructed a prosperous community. Remembering their own hardships, the governments and communities of Hiroshima were keenly aware of the challenges of post-war reconstruction. Here the painful experiences of the past have led to active contributions to reconstruction and peacebuilding, especially after the end of the Cold War. 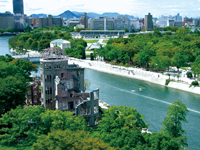 We believe Hiroshima’s initiative toward peacebuilding is necessary and should be further enhanced, if only because the human suffering in war-torn regions is not only unjust but also constitutes a major challenge to world peace, for political instability in post-conflict regions may lead to failed states and militant terrorism. Our focus on nuclear disarmament, therefore, must be combined with efforts for peacebuilding. Furthermore, the simple fact that Hiroshima has arisen out of the devastation of nuclear annihilation will nourish faith in reconstruction among the people in the conflict regions.

The purpose of our peace plan is to help advance Hiroshima as a hub for promoting global peace. We wish to construct a hub in Hiroshima that will channel the demands for nuclear disarmament into actual policy, by consolidating worldwide calls for the abolition of nuclear weapons, both by governments and non-governmental actors, and by promoting inter-governmental negotiations that will convert such hope into reality. We further wish to call for building a hub in Hiroshima where those who aspire after peacebuilding in conflict regions, again both governmental and non-governmental personnel, will gather together and acquire both the resources and training required to carry out the immediate processes. Last but not least, we view Hiroshima as a hub of academic contributions in peace research, making use of the various institutions in Hiroshima, of which there are many, and attracting scholars from overseas to promote studies on strategic arms control and disarmament, conflict resolution, and all efforts directed to the objective of building peace.

This is a tall order. Hiroshima, however, is a place where we can expect the full and active participation of the people in confronting such a daunting challenge. Few if any will doubt the symbolic character that has come to be attached to Hiroshima as a peace hub; Hiroshima has already provided an open space for all countries and actors around the world promoting world peace, with the local governments directly involved in peacebuilding. We are, therefore, making this statement here to highlight Hiroshima both as a historically significant city and as an active hub for carrying out those activities necessary to promote world peace.