Elimination of nuclear weapons and peacebuilding require a long-standing commitment. For such purposes a structure such as a “hub” for global peace would be more suitable than short-term policy initiatives. We believe the following actions would be important for Hiroshima to function as a global peace hub:

First, we propose to start a Hiroshima Roundtable for the discussion of strategies to multilateralize disarmament process with special attention to regional security dynamics in Asia. This is a proposal for a Track2 dialogue, but should be open to participation of representatives from individual governments as well, with a vision to upgrade it into Track1.5, and then to Track1. We believe Hiroshima provides an appropriate venue for delegates and participants to engage in a dialogue on control and reduction of reliance on nuclear weapons as well as building peace. This roundtable should be a spring board to achieve the following agenda.
[Photo Courtesy] UNITAR Hiroshima Office

a.Supporting the roadmap for the abolition of nuclear weapons

Determined to realize the abolition of nuclear weapons, Hiroshima would contribute to the process of abolishing nuclear weapons in a sustainable and substantial way. Possible actions would be:

b.Reducing the risks of nuclear terrorism

Nuclear terrorism will remain a risk throughout the long road toward a world without nuclear weapons, and indeed, even if we achieve complete nuclear weapons disarmament, the danger of terrorists making a radioactive “dirty bomb” or an improvised nuclear device out of highly enriched uranium or plutonium will remain. The history of Hiroshima reminds us both that horrible nuclear destruction is possible but still that a resilient people can recover over time from the great tragedy and loss. We believe, therefore, that Hiroshima can serve as an important hub, through our roundtable meetings and educational efforts to address the following:

To build a peaceful world without nuclear weapons and to achieve post-conflict rehabilitation, it is essential that the international community nurtures and mobilizes politicians and the public. Education is essential for the current practitioners and for the future generation; we need to develop appropriate human resources, educational materials, and organized site visits.

To support such efforts, Hiroshima should aim to serve as a center for developing human resources through extensive practical programs. Possible actions would be: 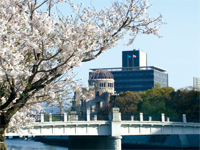 Hiroshima should be aiming to establish a position for itself not only as a symbol of peace but also as the center of a network of activities aimed at realizing peace. Hiroshima should equip itself with a support mechanism for global peace by transforming itself into a support hub where new activities for peace are created, by bringing, gathering and uniting resources such as people, ideas and financial investments from around the world into the community.

If a firm longer-standing commitment is required, however, we should not expect only the people of Hiroshima to bear the financial burden while we pursue these goals. Accordingly, in order to ensure that activities are not curtailed by the vagaries of the political or financial situation of a local government, we propose instead establishing a mechanism possessing a measure of autonomy. Further, in order for Hiroshima to fulfill its roles and duties, both Hiroshima Prefecture and Hiroshima City must not only further their ties but, leveraging their special characteristics and strengths, also cope with challenges as a unified community.

Hiroshima as a hub for promoting world peace should lead a wide range of commitments for peace, such as fostering comprehensive research in peace-related matters; creating venues for discussions among NGO affiliates, government figures, people with practical business experience, and scholars currently involved in nuclear weapons elimination and/or peacebuilding; and comprehensively coordinating “needs and seeds” for sustainable commitment.

We believe Hiroshima to be an ideal choice for the hub to pursue and promote the proposals listed above. As a city that suffered nuclear annihilation, Hiroshima has been the center for many movements that pursued nuclear disarmament and abolition. We are aware that Japan has been on the receiving end of extended nuclear deterrence, but then this only strengthens our belief that a peace relying less on nuclear arms is far better than one dependent on nuclear deterrence. The aim here is to translate the hope and will for nuclear disarmament into actual policy; we believe this proposal to be one that will bring us closer to that ideal.

This Plan was formulated with the full cooperation of the Japan Institute of International Affairs. 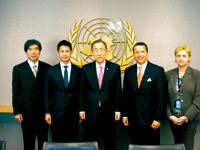