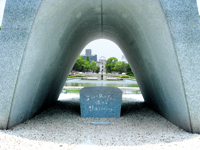 Hiroshima has long embraced a vision to achieve a world free of nuclear weapons, and have consistently worked toward that end, investing tangible resources. As the world continues to change in the 21st century, we now observe hopeful signs that we are moving forward that vision. President Obama has recommitted the United States to work toward the goal of a world without nuclear weapons, and has set a step to reduce the role of nuclear weapons in U.S. security policy as a concrete step toward that goal. In this proposal, we wish to take this historical moment to revamp the vision that has guided our contribution to global peace, so that the future generations may live in a more peaceful world.

For its part, Hiroshima hereby recommits itself to renew its efforts to work toward a world without nuclear weapons. The proposal issued here is a call for partners in creative initiatives to address both longstanding and new emerging threats. Hiroshima cannot, of course, create a nuclear free world alone. But it can galvanize world public opinion, use its convening power to host annual roundtables, and inspire others to join us in this vital quest for a more secure future. 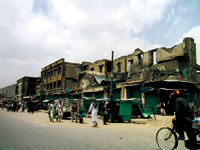 Steps toward nuclear disarmament and non-proliferation, however, are insufficient to achieve sustainable peace. Incessant violent civil wars and international conflicts have destroyed the lives of so many in the world, the very instability that lead toward further violence and terrorism. We must, therefore, work on conflict resolution and post-conflict reconstruction as we move for further nuclear disarmament.

Against this backdrop, we proposea 3 x 3 approach, which revolves around the three key challenges (1) nuclear abolition; (2) reconstruction and peacebuilding; and  (3) envisioning a new security system, and three actions: (1) generating theories for peace; (2) assisting peace making/building practices through human resource development and research; and (3) generating creative ideas and disseminating messages. In casting an enhanced vision we seek to continue efforts towards nuclear disarmament but at the same time embrace new initiatives for conflict resolution and post-conflict reconstruction. In the following, we propose a set of concrete action plans that will take us to a world free of nuclear weapons, promote sustainable peace in regions torn apart by violent conflicts, with a new role for Hiroshima as a hub for global peace.