A Message from Participants in the SDGs Booklet Project

Hiroshima Prefecture was selected for the Sustainable Development Goals (SDGs) Future Cities by the Prime Minister in 2018. The SDGs Future Cities are a government initiative to strengthen regional revitalization by inviting local governments to submit their efforts to achieve the SDGs, selecting cities that choose to make an outstanding effort, and spreading the popularity of their successful examples. As one part of that initiative, Hiroshima Prefecture has co-created a booklet called SDGs and Business with an Eye on the Future: Efforts Made by Companies in Hiroshima with the Environmental Partnership Office Chugoku of the Ministry of the Environment (EPO Chugoku) since 2018. In this booklet, university students in the prefecture interview and report on the front line of the SDGs in business according to local companies. The objective is to encourage the young generation to understand the SDGs in business and share examples from the prefecture with people both inside and outside Japan. We interviewed with MIYATA Naho  and NAGATA Minori, two participants in the compilation of the 2020 edition of the booklet.

What motivated you to get involved?

Naho: I learned the word “SDGs” in my Period of Integrated Study (for independent, hands-on learning) in high school, but the content was vague. I ultimately didn’t know what to do, and my head was full of questions. But it felt terrible not knowing. After starting university, I began to hear the term “SDGs” more frequently. I thought, “Maybe this is an issue I have to consider seriously,” and decided to get involved.

Minori: The first time I heard the word “SDGs” was when there was a project to revitalize tourism in Suo-Oshima island, Yamaguchi Prefecture in 2019. A seminar I was in submitted a plan called “A Hands-On Learning Program for Junior High and High School Students to Study the SDGs.” That made me actually go to Suo-Oshima island and research vacation rental facilities and roadside rest stations set up in vacated stores in order to generate new business. That got me interested, and I participated in this project wanting to learn more information.

What do you recall the most when you were collecting data for your reports?

Minori: I went to collect data at TV Company, TSS (Television Shin-Hiroshima System) and did an interview after touring the live-broadcast studio for the local information program Hiroshima Manten Mama. This year’s booklet is aimed at a society that has to deal with COVID-19, and the concept is transformation from the point of view of the SDGs. The people at the TV station told me that, with the COVID-19 situation, they started by avoiding restaurant information and broadcasting things people could do at home. They also said they gave parenting help and, as a Hiroshima TV station, broadcasted special programs online this year about the Peace Memorial Ceremony and the atomic bomb. I was impressed to see that they had worked hard on both COVID-19 and the SDGs.

Naho: I interviewed staffs from the Sera Town Sightseeing Association, which runs Roadside Station SERA. The tourism industry is the one that was hit the hardest in the COVID-19 pandemic, so I discussed the interview approach with everyone on the team quite a bit before going. But when I actually did the interview, I was told that COVID-19 provided an opportunity to become serious about operating the online shop they’d been running all along. Before this, they could only get their products to people who came to the roadside rest station, but they were able to see a bright side—they gained future visitors because people from far away could get to know their online shop. Beyond that, I learned that the role of roadside rest stations has become as places for local revitalization and community building, not just selling merchandise.

What kind of things would you like to work on in the future?

Naho: Before, I had the impression the SDGs were difficult and didn’t know where to start, but participating in this project made me think, “I can start with the things I can do myself.” For example, just picking up trash ties into the SDGs, and that’s enough. In the future, I’d like to tell people who assume the SDGs are difficult, like I used to, that that’s not the case. If I were to tell elementary school students about the SDGs, I would like to say, “The SDGs are important for the society we’ll live in from now on. You can make the world better yourselves. Things you always do, like picking up trash and not leaving food on your plate, make the world better, so keep it up!”

Minori: To begin with, I think “SDGs” covers too many topics, and it’s hard to understand what they’re striving for in some aspects. So in this project, I thought about what I myself was striving for and felt I personally wanted to tackle environmental issues. As for what to strive for, I think people should focus on what they themselves are interested in, like peace for someone from Hiroshima or economic growth for someone from a developing country, and act based on that. As for specific actions, environmental issues and the SDGs are often seen as overly serious, so I want to popularize them as something fun. For example, by taking pictures of carrying a reusable bottle as something fashionable and uploading them to social media. I’d like to popularize the SDGs starting with those familiar actions.

MIYATA Naho is a third-year student in the Faculty of Human Ecology, Department of Lifestyle Design at Yasuda Women’s University. She was originally interested in housing and interior design, but her experience with the SDGs led her to switch her focus to community development. She is now considering jobs at companies where she can work in community development.

NAGATA Minori is a fourth-year student in the Faculty of Current Business, Department of International Tourism and Business at Yasuda Women’s University. In her job search, she emphasized companies’ approaches to the SDGs and environmental issues. She ultimately chose to work at a manufacturer of building materials for houses that plants trees as it fells timber.

SDGs and Business with an Eye on the Future Part 1

SDGs and Business with an Eye on the Future Part 1 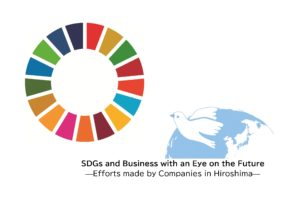 SDGs and Business with an Eye on the Future Part 2

SDGs and Business with an Eye on the Future Part 2