Desiring international peace, Hiroshima Prefecture runs the Future Leaders’ Program for Global Peace in Hiroshima to train young people to contribute to world peace. In the summer of 2020, four  high school students who participated in the 2019 program started the voluntary group MIGLAX (Mirai-Global-Pax) with the goal of aiding the Philippines, which they had visited during overseas training. We interviewed group members Mr. SUEMATSU Dai and Ms. MORI Hinata about how MIGLAX was started as well as the gist of its activities.

What impressed you most training in the Future Leaders’ Program for Global Peace?

Dai: For me, it was the Hiroshima Junior International Forum that was held in August 2019. It involved living with about 30 foreign students–some were exchange students studying in Japan and others were high school students from abroad–and discussing nuclear weapons and peace-building together. In the end, we organized what we learned into a plan of action, the “Hiroshima Declaration,” and presented it. I was glad we could share our points of view and cultures, but what I personally remember most is how I could spend the time with everybody in who participated like we were friends. On the night of the last day, there was an exchange student who wanted a book, so we all went shopping in town together.

Hinata: For me, it was the Payatas area, a Philipino slum that we visited during overseas training. The smell and appearance were far beyond what I had imagined. I was shown inside a home where five family members were living together in an incredibly small house, and they all looked so tired…. Until then, I only ever thought about world peace in the abstract, but I realized there are some things you’ll never understand if you stay home, and I felt I was spoiled in some ways for being born in a peaceful country.

Dai: I was also shocked by Payatas. I had studied the area a little before visiting, but it really brought home just how little I understood what true poverty is. So, when I got back to Japan, I wished there was something I could do to help improve the lives of the people living in Payatas. I reached out to three friends I had gone to the Philippines with and we formed a group. What gave us the idea to form a group was learning in the Philippines that aid must be an ongoing commitment and not a one-time thing. So far, we’ve done things like fund-raising by displaying pictures of the area at our members’ school festivals. In February, 2021, we’re planning to hold a consciousness-raising seminar by connecting online with Japanese volunteers in Payatas and having them update us on the current situation in the area.

Hinata: I joined when Dai invited me. At first, I was reluctant because I wondered whether high school students could make an ongoing commitment, but until now, I’ve always found excuses for not volunteering. Since I have friends to give me encouragement this time, I decided to participate, thinking I wanted to do what little I could. When making the website for MIGLAX, I brainstormed our guiding principles and wrote an introduction.

What did you gain from the Future Leaders’ Program and your MIGLAX activities?

Dai: What changed most for me from participating in the Future Leaders’ Program was perspective. The narrow perspective I had until then broadened, and I could look at myself objectively. Also, I received a several people lecturesduring training, and I took notes on every fact and point of view that was new to me. Those notes are an asset that can’t be replaced. My personal network has also expanded through MIGLAX, so I think it’s an incredibly valuable experience.

Hinata: What I learned from the Future Leaders’ Program was that perspective doesn’t change from traveling abroad; rather, it depends on your attitude at the time. So many times, I’ve had the frustrating experience of having a chance to hear a brilliant lecture but not internalizing it because I wasn’t in the right mindset. That’s why I feel like it’s important to prepare yourself mentally for conscientiousness in daily life. Through our MIGLAX activities, I was reminded of the importance of balancing both your activities outward and your activities inward when managing a group.

The message from SUEMATSU Dai on Starting MIGLAX

I was able to start MIGLAX because I have so many wonderful friends.

To our founding members, Mr. Kusunoki, Mr. Fujikawa and Ms. Mori, who were so busy during the summer of our junior year of a high school not only preparing for university entrance examinations but with club and extracurricular activities as well, thank you for answering my call to start the group.

Also, to Mr. INOUE Hiroyuki, the Executive Director of the Salt Payatas Japan Corporation who offered us so much support at the time of our first project, and to the staff at the Future Leaders’ Program for Global Peace in Hiroshima, thank you so very much.

Starting a group from scratch and cooperating with adults to carry out a project has been an invaluable experience.

I’ll continue to be busy in the future, but I hope I can continue managing our group and starting projects.

Mr. SUEMATSU Dai, junior at AICJ High School. He is on the track team at school, focusing on sprinting.

MIGLAX (Mirai-Global-Pax) Four high school students from Hiroshima took advantage of their chance meeting at the Future Leaders’ Program for Global Peace in Hiroshima and established the volunteer group MIGLAX to do their part in contributing to international peace. In addition to consciousness-raising seminars and fund-raising activities, it has also taken up the initiative of selling embroidered towels and masks handmade in the Philippines and returning those profits to the area through a local nonprofit

In order to have all high school-aged students aim to become capable world citizens who desire international peace, the program challenges them to improve their English skills, study international issues such as nuclear disarmament and conflict resolution, and take their first step towards their future. 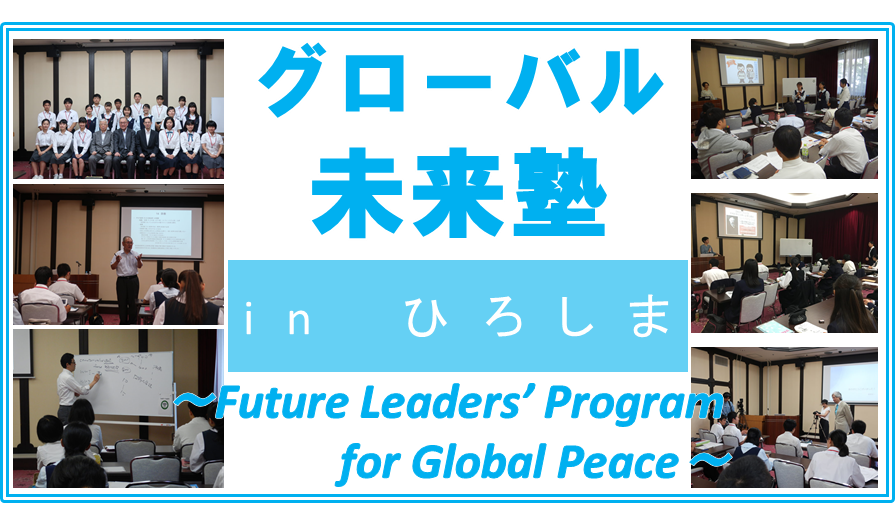 A forum held to nurture the human resources of the next generation by having high school and other students from both Japan and abroad discuss international peace, exchange cultures, and send their message of peace into the world.