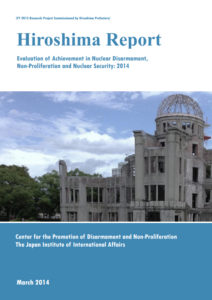 On April 7, 2014, Hiroshima Prefecture announced the latest publication of the Hiroshima Report. The Report studies, analyzes and evaluates 31 countries’ performance on nuclear disarmament, non-proliferation, and nuclear security. This Report is the 2014 version, analyzing the development on these issues in 2013.

The Hiroshima Report lays out challenges for nuclear-weapon-states to work on nuclear disarmament, and introduces efforts made by non-nuclear-weapon states.

In announcing its publication, Governor Yuzaki said that he hopes to make the Hiroshima Report widely known in the world in order to bolster the worldwide momentum for the abolition of nuclear weapons and motivate each country to take new measures for nuclear disarmament.