Atomic Bombed Trams that supported the reconstruction of Hiroshima part3

Aioi Bridge before its replacement and Atomic Bomb Dome around 1970 (Photo: AKEDA Koji)

During World War II, many cities in Japan were bombed and devastated. The city of Osaka, economic and transportation center of western Japan, was also subjected to indiscriminate bombing by B-29 bombers. Between March and August 1945, it was hit by a series of eight bombing raids that destroyed large parts of the city and killed more than 10,000 people.
The trams that survived the raids was “Car No. 762”, which still runs through the streets of Hiroshima. It was originally converted from a large-sized sprinkler truck, ”Car no. 1581”, and was manufactured in 1940. It served as the transportation for the citizens of Osaka. “Car no.1581” was damaged in air raids, and in 1940, it was renumbered as “No. 762” when it was transferred from the Osaka Municipal Transportation Bureau to the Hiroshima Electric Railway with three other trams of the same type.
The coloring, which was divided into two, brown and cream, is a replication of the paint used in the Osaka City Tramway. Later, three cars of the same type were discontinued, but only “Car No. 762” is still running in service.

The city of Hannover, Germany, like Osaka, was a major economic and transportation center and was targeted for strategic bombing by the Allied Forces of the U.S. and Britain during World War II. It is said that the city was bombed 88 times between 1940 and the end of the war, killing about 7,000 civilians and destroying about 60% of the city.

In 1983, Hiroshima City and Hannover City formed a sister city relationship as cities that had experienced the horrors of war and had recovered from them. To celebrate the fifth anniversary of the partnership, the city of Hiroshima presented Hannover with a tea house. In return, the City of Hannover donated “Car No. 238” to Hiroshima Electric Railways through the City of Hiroshima.

These days, the tram is mainly operated in winter, and in December every year, it is decorated with lights as a “Christmas Tram” and adds color to the winter scenery of Hiroshima. It is worth remembering that these decorated trams we enjoy seeing, also survived the ravages of the war in the past.

※The supposed target of the atomic bomb was the Aioi Bridge.

(This article is based on the following book.)

Just three days after the atomic bombing, Hiroshima’s streetcars resumed service one after another. This is a visual book of real-life accounts of the atomic bombed trams, which are historical monuments in operation.

Atomic Bombed Trams that supported the reconstruction of Hiroshima part1

Atomic Bombed Trams that supported the reconstruction of Hiroshima part2

You can read a grandmother’s experience of being a driver as a young girl, drawn as a manga by her granddaughter. 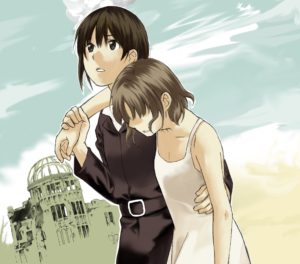