On the day of the event, near the Cenotaph for the A-bomb Victims in Peace Memorial Park, the participants passed penlights along as they were batons of peace, under the theme of “Passing the Baton of Peace.” They expressed their opinions towards peace and the abolition of nuclear weapons to the world.

The event started with a message from Ms. KIRIAKI Chieko, 91 years old, an A-bomb survivor. Her wish for peace was passed on to the youth as a “baton of light.”

“The Name of Life” performed by undergraduate and graduate students of the Elisabeth University of Music.

A Youth Peace declaration was made by Ms. NAKAMURA Sonomi; the speech was also delivered in English (by Mr. AGEMURA Shuka), and in French (by Ms. MATSUHASHI Yoshino). The declaration was then handed to Mr. MATSUI Kazumi, Mayor of Hiroshima.

Participants waved penlights in the air to the video of a performance on a Hibaku Piano (The piano survived the atomic bombing of Hiroshima). Many people stopped to watch the event.

Comments from the members

“After seeing last year’s Meeting for Peace with the Pope, I thought it would be nice to have a peace declaration by young people in a solemn atmosphere, so I planned this event. I hope that the Youth Peace Declaration will reach young people, who have never experienced war, and I hope that future generations will take an interest in peace and participate in our activities.”

IWAMOTO Risa (22), a fourth-year student at Hiroshima University and a member of the organizing committee, also originator of the “Batons of Light.” :

“I came up with the idea of the ‘Batons of Light.’ I wanted to create an event that would not only look to the past, but also to the future. For me, learning about peace through the Peace Club* for junior and senior high school students finally led to this event, and I think this personal experience can also be called a “baton.” Our generation will live both in the time with A-bomb survivors and future generations. We will continue to work, to pass on the baton of peace.”

“I moved to Hiroshima when I was in third grade of the elementary school, and that’s when I first learned about the atomic bombing. There is such a difference in knowledge between children in Hiroshima and those from outside the prefecture, and I think it’s worthwhile to convey the history of Hiroshima. In the English declaration, I included the words, ‘ When the time comes, we will be voices for the voiceless ‘ As the last generation to be able to hear directly from the A-bomb survivors, I want to raise my voice.”

As the sound of violins and pianos echoed in the illuminated Peace Memorial Park after sunset, participants gathered around the cenotaph. The youth peace declaration, watched by many people, was held with a solemn atmosphere with the illuminated cenotaph and the Atomic Bomb Dome in the background. I felt that the event was truly a success as intended.

The event was broadcast live so that the thoughts of the young people could be spread to the whole world. It was also translated into four languages (English, Russian, French, and Chinese) of the five countries designated as “nuclear- weapon states” by the NPT (Treaty on the Non-Proliferation of Nuclear Weapons) and posted on the Executive Committee’s Instagram. After the success of the first event, the members of the committee voiced their desire to hold “Peace Night Hiroshima” again next year and after. The “baton” of wishing for peace will continue to be passed on to the future.

All text of the Youth Peace Declaration is available on Instagram of Peace Night Hiroshima.

A program run by the City of Hiroshima and Hiroshima Peace Memorial Museum, encouraging students to learn about Hiroshima and the atomic bombing, think about peace, and act initiatively.

When Pope Francis visited Hiroshima, the meeting for peace was held in the Peace Memorial Park. Pope Francis made a speech on peace. 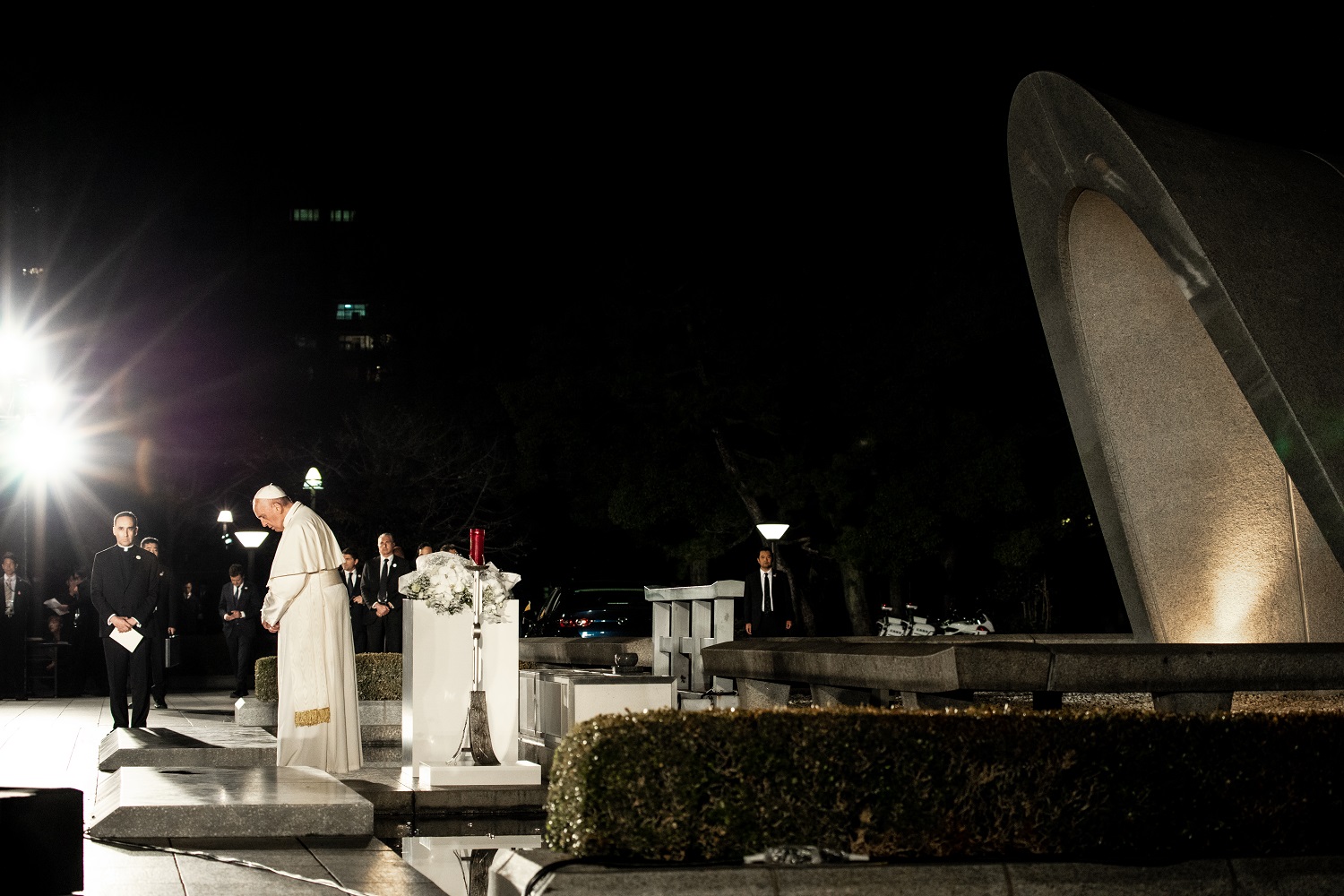