Their remarkable efforts equal to reporters from national newspapers and TV stations has become a hot topic in the mass media. It has also been covered by a lot of media.

Inoue: The theme for this year’s edition (2020) is ‘Passing on Memories.’ We’ve included a project that relates the students in Sotoku Senior High School of that day with the students of today. The place where students died in the atomic bombing is also a route to school for today’s Sotoku students. We wanted this to be a chance for students to feel closer to that day.

After school, members of the newspaper club gather in the library space.

They usually start interviewing for the peace issue from the previous year, but this year the club was suspended from activities in March due to the COVID-19 pandemic, and it wasn’t until June that they were able to resume activities. After that, they did some intense work on gathering information. While interviewing, they found that this year’s peace memorial ceremony was completely different from what they had seen every year.

Kawakami: There were so few people at this year’s Peace Memorial Ceremony that I was surprised to find out whether it was really a memorial day…. What was impressive, though, was a remark by an elderly woman who held her hands together in front of the Cenotaph for the A-bomb Victims, saying ‘It is important to show up, but the most important thing is to hope for peace.’

Even if you can’t attend the ceremony, you can hope for peace from anywhere as long as you have the mind to do so. This is something I realized because I covered the story in the midst of the crisis of COVID-19.

So far, they have released the newspapers concerned with the U.S. President Barack Obama’s visit to Hiroshima in 2016, the Pope’s Meeting for Peace, and the movie ‘In the corner of this world.’ The students themselves come up with their own topics to cover in the newspaper, and their advisor, Mr. HANAOKA Kengo, advises them not to use Internet articles and to take their own photos for the newspaper. He want students to understand the importance of being in the field and getting a lot of feedback.

Hanaoka: When we want to cover something, I discuss with the students about how to attain it. When they become adults or parents, years or decades from now, I believe they could see and perceive things in a different way from this experience. I hope they will do their best to be aware of what is happening in the present.

Due to the COVID-19, they could hardly meet the new members of the club.

Sotoku Senior High School has become co-educational from this year. The newspaper club also welcomed female members for the first time, another new history is made.

Inoue: In addition to what we’ve built up over 70 years, I think it’s important to keep up with the latest information and demonstrate a modern sensitivity as today’s high school students .

Kawakami: We want to take over what our seniors have been doing for a long time and we want to keep in mind getting Sotoku students to read it with interest.

Matsuura: We’re learning every day that people from different professions and positions have different perspectives and ideas. Because I grew up in Hiroshima, I feel that I have a mission to carry out.

Through newspaper production, they pass on their passion for peace, which they have been handed over from their seniors, to those who come after them.

The club was founded in 1949. Presently, the club has 35 members. It annualy publishes more than 100 issues of newspapers.

In response to ‘The Treaty on the Prohibition of Nuclear Weapons has been confirmed to enter into force,’ they interviewed Mr.YUZAKI Hidehiko, Governor of Hiroshima Prefecture and Mr. MATSUI Kazumi, Mayor of Hiroshima, at the event held in front of the Atomic Bomb Dome on October 25, 2020. A newspaper bulletin reporting on the rally and their respective interviews was published on Oct. 27.

How did the Japanese and foreign media cover the disaster wrought by the first atomic bombing in human history? Journalists in news organizations tried to spread word of the unprecedented conditions in Hiroshima City. 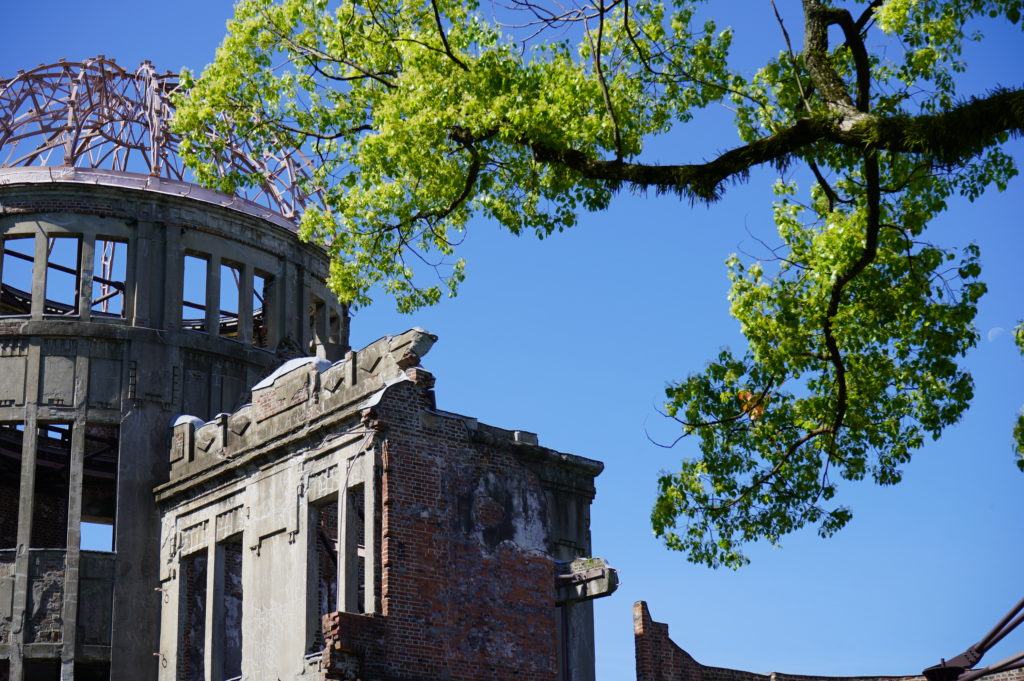