When you stand here, how and what do you feel? 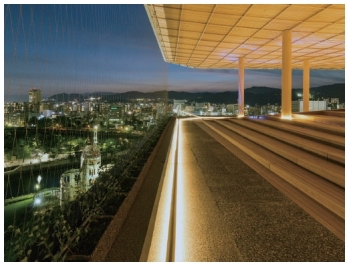 Commanding a view of the past, present and future of Hiroshima

Hiroshima Mazda was founded in 1933 near the Atomic Bomb Dome. In 1945, all the staff members of Hiroshima Mazda were killed by the atomic bomb. Hiroshima Orizuru Tower was opened by Hiroshima Mazda, whose main business is the sales of automobiles, in September 2016. On the first floor of Orizuru Tower are a café and a souvenir shop, where meals unique to Hiroshima and locally produced products, respectively, are provided. In Orizuru Square on the 12th floor, there is an observatory on the rooftop. Hiroshima Hills, a wood deck observation space, is an atrium without windows, where you can directly feel the air and wind of Hiroshima. The exterior appearance of the building is designed in such a way as to harmonize with the nature of Hiroshima Peace Memorial Park adjacent to the building in terms of color. It is also designed in such a way that light inside the building does not leak out at night.

The tower was built for the purpose of providing people with an opportunity to see Hiroshima, a city that has been restored from the war damage. Brochures are available in 17 languages with the hope that many people not only from Japan but also from around the world visit the place.