Since 2004, the Hiroshima Peace Memorial Museum has sponsored “Painting the Atomic Bombing with the Next Generation”. It is a project that communicates scenes and situations that atomic bomb survivors cannot express through words in their testimonies. Students of a special creative expression course at the Hiroshima Municipal Motomachi Senior High School have been a part of the project since 2007, handing down the activities from older to younger students.

Every year around October, survivors and students gather for face-to-face meetings, to hear stories about the bombing and to set directions for the scenes to be painted. In subsequent individual discussions, the participants move ahead while carefully checking the composition and color of the works, and complete paintings over the course of about nine months. The paintings of the bombing are exhibited every August and December, with the students themselves using the gallery talks to present the thoughts that went into the pictures.

We interviewed four students who engaged in this activity, together with their advisor, OKUDA Yuho.

OKADA Yuri is a second-year student from the town of Fuchu in Hiroshima Prefecture. Receiving less education about the atomic bomb than do students in Hiroshima CIty, she says there were many things she didn’t know about the atomic bomb and the war. “In a meeting during my first year, there were a lot of words I didn’t know, and I wasn’t always convinced by what the survivors were saying. But when the painting was completed, I felt I was being made part of something really big. Through the activity, I learned a lot about peace, and felt embarrassed by how little I knew before. It made me want to learn more about peace.”

This year, she is working on two paintings with KIRITAKE Chieko, who experienced the atomic bomb at the age of 15. “One shows a scene when she was cleaning up at school, and a younger student came back with severe burns. The other shows injured persons being carried into an army clothing depot that had been turned into a field hospital for the injured, and bodies being burned in an open space. This location still stands, so we visited the site to make sketches. We want to take the scale of what we saw there and give it life in the paintings.”

“Mr. Arai was exposed to the bomb and lost consciousness while carrying scrap wood from an evacuated building. When he came to, he saw a bright red sun amid darkness. He said the color was just as red as if it had come out of a tube of paint. He said he could see little for all the dust in the air, but dimly saw the flow of people walking.”(Okada)

In 2020, second-year student TAKEHARA Akiho created a painting with the title “Let’s All Die, All Together!!” based on the testimony of YAHATA Teruko. It shows a mother after the bombing, covering her family with a large blanket out of fear that another bomb could be dropped. “Ms. Yahata started by saying that she could never forget the expression on her mother’s face as she said, ‘Let’s die together.’ I imagined the feelings of a mother desperately gathering her family out of fear. When Ms. Yahata saw the completed picture, she looked at the legs drawn toward the side and said, ‘Oh, it’s dad!’ She was moved, and told me that it brought back all kinds of memories, not only of her mother. I’m happy to think that the picture I painted connected to the testimonial activities.”

This year, based on the testimony of Osaka Prefecture resident MORI Yoko, Ms. Takehara is painting sisters walking among corpses and rubble, ordered by their mother to escape to the bamboo grove. She sketched the two sisters as modeled by her classmates, escaping on foot. “I was glad to be able to use art, something that I’m good at and that I enjoy, to give shape to the thoughts of the bombing survivors. I felt I want to keep this up and pass it along to the next generation.”

“One viewer of the painting told me that the expression of the mother, preparing for the end, left an impression. I think that a war that creates such sad expressions must never happen again.” (Takehara)

In 2020, KAWASAKI Asuka, a second-year student and head of the Art Club, worked on production with one of the older survivors, KUNIWAKE Yoshinori. She says she was impressed by how Mr. Kuniwake took part in the activity with a feeling that it was his “final duty.” “I feel that the opportunity to hear stories directly from the survivors, not just painting the bombing scenes, is becoming more valuable year by year. I’ve heard that the paintings will be used in the survivors’ own activities in handing down their experiences. It makes me happy to think that our works can be of help in peace activities. I want to keep on doing this as much as I can. I created ‘The Stone Steps Where Four People Were Sitting and Drinking’ from Mr. Kuniwake’s testimony about people drinking alcohol from a vault on the evening of August 8. Two of them died by the next day. It’s known that the atomic bomb took many lives in an instant, but I painted the picture in the hope of conveying the the lesser-known loss of lives due to radiation.”

This year, Ms. Kawasaki is painting a scene from the testimony of Sendai resident KIMURA Hisako. It depicts her caring for her grandfather, appearing like a spirit of the dead after exposure to the bomb, in the family’s Buddhist altar room. (Top photo)

“The painting shows two men who lost family members to the atomic bomb, drinking and feeling good, while Mr. Kuniwake and his father worry about their drinking. At a glance, the picture seems to have nothing to do with the bomb, but I hope people will read the commentary and envision the story.” (Kawasaki)

“The air raid warning had sounded many times the day before, on August 5, but nothing happened. Ms. Ogura’s father had a bad feeling about that, so he had her stay home from school. To express the flash of life, I used a painting knife to layer a lot of colors.” (Harada)

A third-year student graduating this year, HARADA Mahiru says that the activity has dramatically changed her thoughts on peace. She aims to become an art teacher in the future. “I came to take note not only of August 6, but also of wars happening around the world. I’m going to go on to an education-related university to study the relationship between peace and art education. I’ve learned about the activities of people who communicate the tragedy of the bombing, even people who did not experience the bombing themselves. I want to do that too. I want to continue communicating to people achieve peace.”

While a first-year student, Ms. Harada painted “Dazzling Light” based on the testimony of OGURA Keiko. The painting shows the moment when the atomic bomb fell and flashed while Ms. Ogura, who was absent from school, was outside and looking in the direction of the school. She was particular about expressing the light, which seemed to pierce the eyes.

”Ms. Ogura also gives testimony overseas. At the start she said to me, ‘Your painting will go across the sea.’ I didn’t have a sense of that while I was painting, but now I feel that a lot of people are looking at the painting.”

When students spending long hours on their works worry about color and composition, advisor OKUDA Yuho tries to offer specific advice to let the students continue wielding their brushes until completion. “The role of students is to serve as the hands of the testifiers in communicating. I give them the advice that, even if everything is not consistent in the painting, if the scene is what remains in the person’s mind, then it is important to faithfully reproduce it. Interacting with the testifiers is also a lesson in sociability; even a student who has never spoken up much can start talking as if a different person. The testifiers are really pleased when the pictures they’ve created with the students are completed. It makes me feel anew the amazing power of pictures and the power of the students.”

The project has yielded 152 paintings of the atomic bombing so far, with production moving ahead this year as well. In addition to requests from the Hiroshima Peace Memorial Museum, there are requests from atomic bomb survivors living in Miyagi Prefecture and Osaka Prefecture for paintings to be used in peace activities in different regions.

As seen in their agreement that painting the pictures has been worthwhile, the students grow in awareness of peace, and feel pride in contributing to society. The pictures, painted with heart, will serve as valuable materials in conveying the tragedy of the atomic bombing into the future.

The club hones individuality through expressive activities, and creates and communicates art culture. It also actively engages in exhibitions where students’ works can be seen up close. The works are permanently exhibited in a gallery in the school.

HP：https://www.sozohyogen.jp/ (Only Japanese is available)

The atomic bombing paintings can be viewed on the website of the Hiroshima Peace Memorial Museum.

At the event held on January 22, 2021 to commemorate the entry into force of the Treaty on the Prohibition of Nuclear Weapons, exchanges of ideas were held among students in the Art Club of Hiroshima Municipal Motomachi Senior High School and young people working in Hiroshima to abolish nuclear weapons. 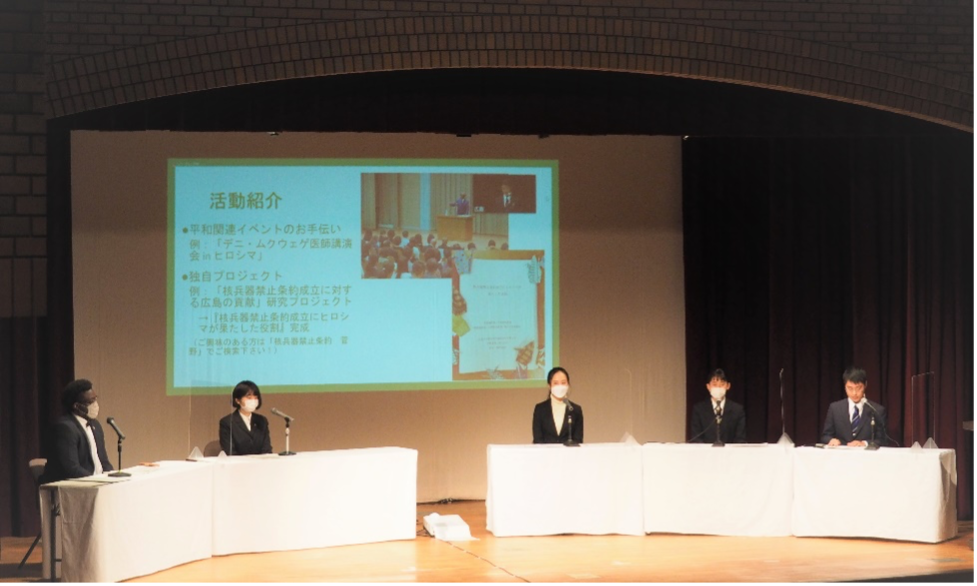 "Portrait of Light" The importance of passing the future on

"Portrait of Light" is a project to paint portraits of atomic bombing survivors. We interviewed Professor Morinaga of Hiroshima City University, who was involved in the project.

"Portrait of Light" The importance of passing the future on 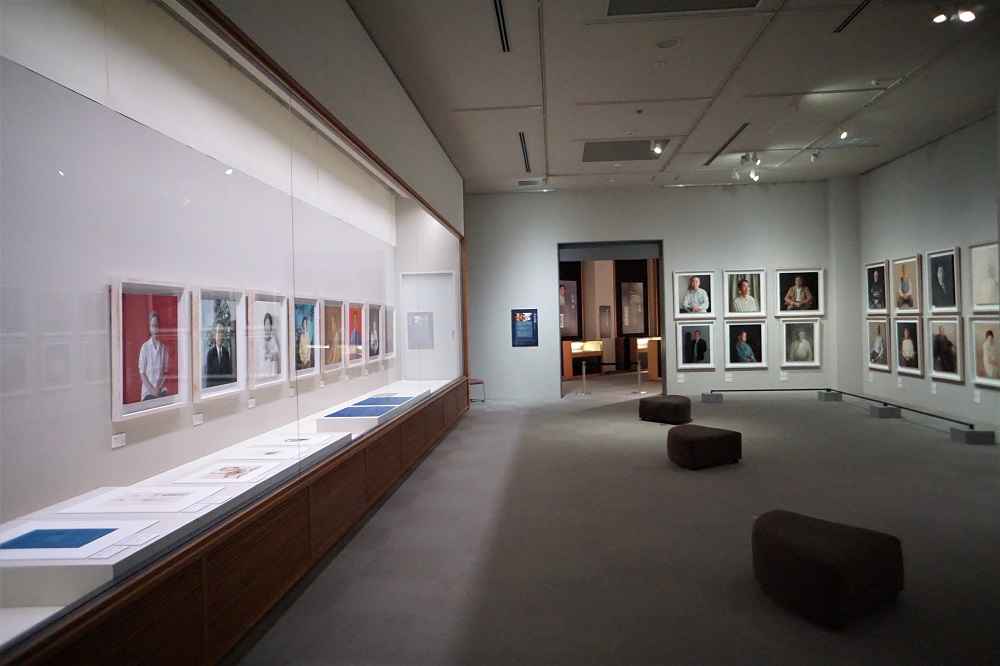