What ought to be done for our objective of nuclear disarmament? Well aware of the many constructive proposals on the table, we wish to call attention to the following three agenda items that we believe deserve more attention.

First, in spite of the many proposals for comprehensive nuclear disarmament, the actual reduction of nuclear weapons has been more or less dominated by the US-Russia bilateral process. As the United States and Russia possess more than 90 percent of all nuclear weapons on Earth, this focus on bilateralism was quite understandable, but the nuclear weapons held by powers aside from these two were virtually left intact in this process.

This focus on a bilateral process will pose a challenge to comprehensive nuclear disarmament. Bilateral reduction of nuclear weapons has proceeded in a way that assured the numerical supremacy of Russian and American nuclear weapons: however many warheads the two cut, the two nations still hold far more than other nuclear powers. If both the US and Russia wish to maintain such a preponderance of numbers in the future, it follows that bilateral reduction will slow down as their numbers come closer to those of other powers. Russian and American initiative toward nuclear disarmament, therefore, will fizzle out if the process is kept at the bilateral level.

How, then, can we engage nuclear-armed states other than the US and Russia in a more comprehensive nuclear disarmament? It is easy to see the reluctance of the other nuclear-armed states to be involved, as their capability is much smaller. Unless a new agenda is set, however, not only will those states with smaller numbers of nuclear weapons be left out of disarmament, but we must also expect a slowing down and eventual halt of the bilateral process as well.

The agenda here should be clear enough. Unless we involve more nations other than the US and Russia in the reduction of strategic arms and initiate a multilateral process of nuclear disarmament, we will never be able to abolish nuclear weapons in the future. How can we establish a multilateral disarmament process that involves nuclear-armed states with divergent strategic priorities and interests over nuclear weapons without waiting for progress in the next round of the new START talks and diminishing the nuclear forces of the United States and Russia to a certain level?

We must, in short, make sure that the process of nuclear disarmament will provide security instead of instability. This leads us to our proposal in the form of continuous multilateral negotiations, both at the inter-governmental and non-governmental levels, continuing in a way that, while collectively working on the mutual reduction of nuclear weapons, build the confidence and ensure security of participating nations and seek every opportunity to turn informal gentlemen’s agreements into more formal institutions based on legal and binding agreements. This is our first challenge.

Nuclear-armed states have often defended their nuclear capability as essential to their national defense given the lack of regional security. Although we do not need to accept such a justification, the question remains: how can we address the stability of regional order as an underlying factor to further reduce the role of nuclear weapons?

As far as relations between the US and Russia are concerned, traditional concepts of nuclear deterrence no longer serve much utility, as the relationship between the two nations has developed to a level of stability that does not require mutual threats of assured destruction. If we turn our eyes to other regions, however, we can still observe inter-state relations dependent on deterrence and extended deterrence. The threat of a major nuclear war between the United States and Russia may have receded, but such a development has yet to be seen in other regions.

The Asian region is a case in point. Virtually all new nuclear-armed states, including India, Pakistan, and North Korea, maintain their nuclear capability claiming as essential to their national defense. In comparison to the current Russo-US relationship, the relationship between China and neighboring nations remains more unstable, lending grounds for continued reliance on deterrence and extended deterrence. It goes without saying, too, that nuclear proliferation to the Middle East will further jeopardize efforts toward nuclear disarmament.

In this regard, we must establish a connection between multilateral nuclear disarmament and regional security. Many nuclear-armed states do not have a strategic objective at the global level; they focus more on narrowly defined security concerns such as regional rivalries or regime survival. Although the importance of addressing regional security has been addressed before, previous proposals for nuclear disarmament have paid little attention to the intricate details of regional conflicts.

Up to this day, efforts for nuclear disarmament have been somewhat treated separately from those directed toward bringing peace to regional conflicts. We believe otherwise; we see the need to go beyond nuclear arms control.

Many of the powers with nuclear capabilities lie in regions facing serious security tensions that may develop into actual warfare. In regions where military clashes might arise from a whole range of possibilities, including ethnic or religious conflicts, continuing disputes over contested borders, or the lack of state capacity to control domestic radical militants, the possibility of nuclear weapons being not only developed but actually used in military engagements is undeniably real. And even if nuclear weapons were not actually used in regional conflicts, the emergence of failed states will provide a political vacuum that may be exploited by militant groups or terrorists to develop nuclear weapons of their own. This clearly shows us that efforts toward nuclear disarmament must be carried out in a broader perspective of bringing peace to regional conflicts through such efforts as preventive diplomacy, conflict resolution, and post-conflict peace building. 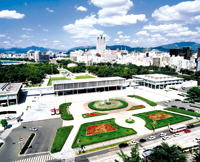 Hiroshima deserves to commit itself to actively engaging in conflict resolution and peacebuilding. Most post-conflict societies that have experienced total destruction have to rise out of despair to pursue rebirth and reconstruction. Hiroshima went through a similar process. After its experience of mass killing, Hiroshima achieved physical recovery in terms of the reconstruction of buildings and infrastructure. Government functions such as basic public services were also restored. This was a painful process, especially for hibakusha (atomic bomb survivors), who endured decades of physical and psychological sufferings. Post-conflict societies, similarly facing the need for physical and mental recovery, will confront the long and arduous task of mental reconstruction.

Therefore, Hiroshima’s experience, especially from the viewpoints of ordinary people who actually shouldered the burden of reconstruction, could be shared with the people involved in post-conflict reconstruction and peacebuilding. Hiroshima has the potential to help them toward this goal by sharing its pains and sorrows. This is an important asset of Hiroshima, that grew out of its negative legacy, and that which should be put to full use in the process of peacebuilding.

In engaging in broader efforts to build peace, the Hiroshima community needs to address the possible challenges that could arise when working on post-conflict reconstruction initiatives in failed states or nations still at war. It is important to note that confidence building, capacity-building and long-term financial commitment are essential for successful achievement of peace-building. The third challenge for Hiroshima is to change the paradigm that has so far guided developed nations that focuses solely on infrastructure reconstruction in assisting post-conflict nations.